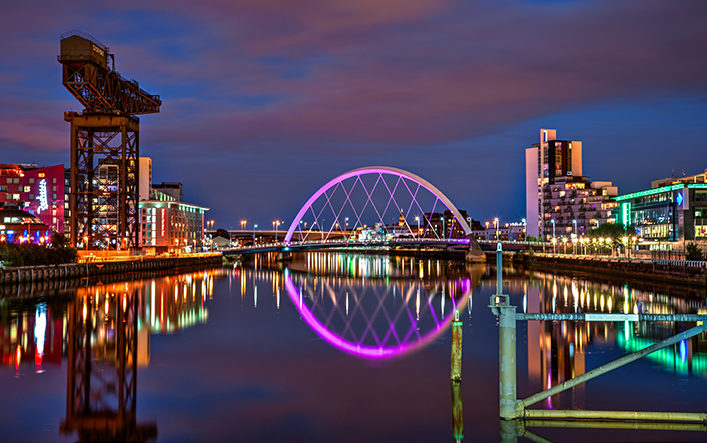 When you hear the words “Scotland”, most people will conjure up images of the Highlands, the rollings hills, countryside and of course, the gloomy weather. Others will ask if you’re visiting Edinburgh, Loch Ness, and maybe Inverness since those seem to be the only places that are mentioned in Pop Culture these days.

Edinburgh may be the capital of Scotland, but it is only the second largest city in Scotland. The metropolitan area of Glasgow is home to half a million people, and once you arrive you can quickly see why. Consistently overshadowed by its sister city and only a 45 minute train ride from Edinburgh, Glasgow somehow combines the Victorian architecture of its early Industrial era with modern buildings sprouting up on every corner.

Glasgow is a hidden gem to tourists, showcasing museums filled with art and enriched with the fascinating history of the Scottish people. It is the cultural center of Scotland as it hosts famous artists like Post Malone, Ed Sheeran and now boasts of the locally grown Lewis Capaldi. There is not a single day where live music is not being played somewhere in the city.

Besides music, Glasgow is known for its eccentric people – as their motto goes – “People Make Glasgow”. This is due to their friendly nature, and some of their eccentric behaviors that you may see at night.

One of the first places you must visit is Ashton Lane, located in the West End near the Hillhead subway stop. This area is extremely ‘Gramable, as it is the most photographed place in Glasgow and you will easily see why. It is easy to miss since you have to walk down a small alley less than 100 meters from the subway station, right before you reach the Ubiquitous Chip pub. Soon after you will reach the Ashton alley and will understand why so many people venture to this spot to take a photo.

Not too far away is the Glasgow Botanical Gardens, one of the largest parks in the city. One of the first places to check out in the Gardens is the Kibble Palace, a Victorian era glass palace that feels like you have been transported to another time. Inside there is a small koi pond right when you walk in, and a small room to the left which houses poisonous plants. The center of the building showcases classic Victorian statues mixed in with tropical plants and trees. It is great for those interested in taking some artsy Insta pics or natural photography, as there is a lot of beautiful plant life throughout the garden.

If museums are your thing, not too far away is another popular location for locals – the Kelvingrove Museum and Park. This museum includes paintings from famous artists like Salvador Dali and pieces from famous Scottish designers like Charles Rennie Mackintosh. It also includes dinosaur bones and other natural history exhibits. It definitely has a more traditional museum feel, similar to that of the Smithsonian museum in Washington, D.C. if you’ve ever been. Since this is a free museum it is recommended to donate £5 or more when you visit.

Behind the museum is Kelvingrove Park, which has lots of lovely paths for those who like to take long walks or runs. Many locals will walk their dogs through the park, and don’t be worried if they are not on a leash, the majority of dogs are well trained where they follow closely to their owner. On a nice sunny day, you will see the lawn filled with locals laying on the grass getting as much sun as they can. You may even hear the locals say “Taps Aff” and see guys walking around shirtless whenever the sun is out, no matter the weather – the Scots definitely do not miss an opportunity to soak up the sun!

Another popular museum is The Lighthouse, which has a breathtaking view of the city from the heart of Glasgow. Lots of architectural and contemporary art is showcased in the building, although the majority of people primarily go for the view of the city.

For general entertainment, a walk down Buchanan Street is always a good idea. You will see at least 3 different performances ranging from singers, drummers, a bagpiper or a random performance act at any time of day – even at 2am! Besides street entertainment, this is the main place people shop and hang out. It is typically busy after 4pm, and especially from Thurs – Sunday. Either way, Buchanan Street is an amazing place just to walk around and really get a sense of the culture of Glasgow.

Near St. Enoch’s Mall, there is a nice hidden bar called Sloan’s along Argyle Street. They claim that it is the oldest pub in Glasgow, but it is also one of the best local hot spots to visit. Inside has the old pub feel practically transporting you to early Industrial Glasgow, and solidifies it when you listen to a live performance of folk music if you’re lucky.

As part of the city centre, Merchant City offers lots of cool places to eat, drink and enjoy the amazing murals all over the city. The first place to check out is the Merchant Square building. It holds over 7 restaurants and regularly hosts craft markets on Saturday mornings. In terms of food and drinks, there are several great places to visit in Merchant Square.

Bar Soba is a chain in the UK, but has amazing Thai street food style cuisine and even better drinks. O’Neills has decent food and beers, but is best when a football match is on the big screens with fans cheering them on. Metropolitan has the best drink menu and is the go-to spot before a night out. I recommend heading to the upstairs during this time so you can hear your friend as the downstairs can get pretty loud.

Another popular destination is the Gallery of Modern Art in the center of Merchant City. This museum has a new exhibition every few months, and is definitely a must see when you go to Glasgow. One of the highlights of this building is the Duke of Wellington statue in front of it which has a traffic cone on its head! The tradition started decades ago, where local Glaswegians thought it would be funny to place a traffic cone on its head. The city repeatedly took down the cone, but it would always end up back on until finally the city gave up as it cost too much to keep removing the cone. Now whenever there is a protest or a particular holiday coming up, you might see a different coloured traffic cone on its head or a second cone on the horse’s head.

Near the GoMA, The Social is a popular bar for locals to meet up or listen to live music. It is a little pricier than other places, but the drinks are really good and is open until 3am. This is definitely a good place to gain a young, local feel to Glasgow.

If you’re looking to relax, George’s Square is a popular place for locals to go and lay in the grass on a sunny day. During the summer and winter months, you will see the Square filled with business shops for a special event or the Christmas market. It is right next to the Queen Street Station, so pop on by on your way to/from the train!

Technically still in Merchant City, the Glasgow Cathedral and the Necropolis are must-sees in the city. The Cathedral is believed to have St. Mungo’s, the patron saint of Glasgow, buried inside. The Necropolis has one of the best overall view of the city, capturing the sprawling city below with a backdrop of the rolling hillsides behind the city. It is the perfect place to be during either the sunrise or sunset (although technically it is illegal to be there while it is dark out).

If there is one thing that you must do in Glasgow, it is to go to Glasgow Green to walk along all the different paths and visit the People’s Palace. There is a lovely path along the Clyde River which circles back directly to the Palace. As is typical to any sunny day, you will see TONS of Glaswegians laying around or playing football in the park and likely with their shirts off. In terms of the People’s Palace, this is a free museum located in the center of the park and has a lovely set-up on the complex history of Glasgow and Scotland itself. While this is a free museum, it is highly recommended to donate £5 or more when you visit.

Obviously there are a lot of amazing things to see and do in Glasgow, so this list is just to gain a small insight and a local’s personal guide to the city. If you are interested in learning more about Glasgow, let me know what kind of stuff you want to know more about! Feel free to leave a comment below with your thoughts 🙂